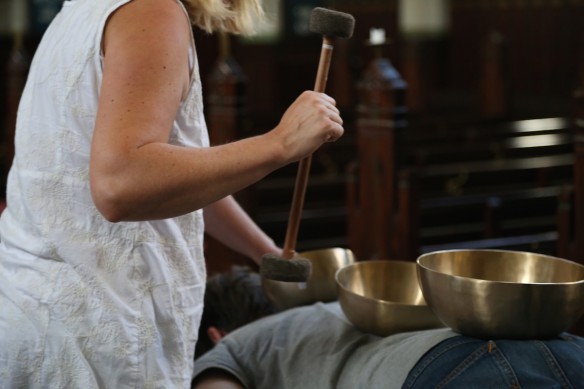 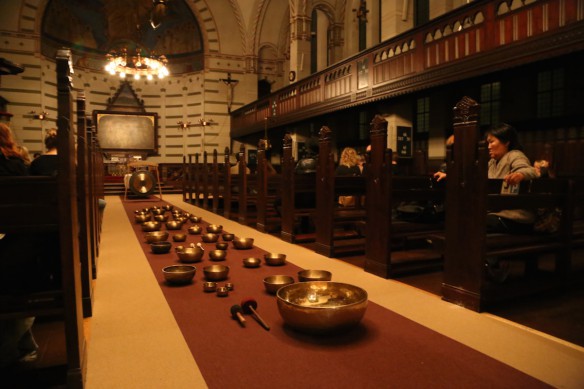 Self-development and self-realization in a psychology-based world has in many ways taken the place of religion. The answer must be found “in yourself” a good life “is lived from within.”
The idea that people have a conscious and an unconscious part of the mind, is in my belief widely accepted. Being able to “work” with the unconscious part of the mind is part of our time psychological understanding of reality. One can say that the “unconscious mind” where to “look inward” for understanding and explanation, has taken over the transcendental place of God where you looked out / up for understanding and explanation.
Many of the infinite ways and forms found in the self-development (in the expanded field) I find exciting, interesting, absurd, poetic, beautiful, ugly, etc. 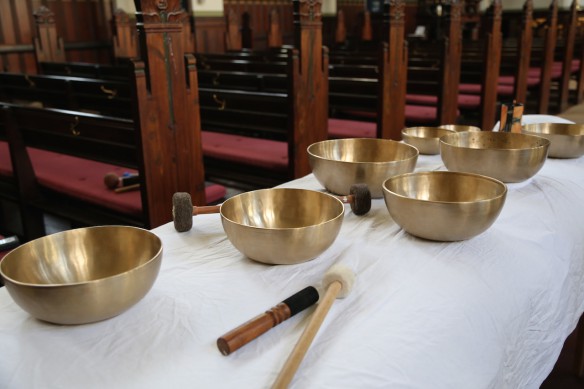 I was attending a music festival at Vesterbro, Copenhagen in late April, at one piont I enjoyed a sandwich and a pint along with a few friends and a few concerts. One of the venues was Kristikirken.
Out in front of the church, and at festival in general, there was a good atmosphere.
I was smoking a cigarette outside, and a Polderabend bride used my lighter for her cigarette.

The lady in the big crazy white dress was pastor Liane – not a Bride,,, We started talking, and she told me that they had culture in the Night Church every Thursday.

KLANG MASSAGE
I invited the priest of the Night Church Liane and a few other artists to try sound massage in the church. The sound of these sessions were recorded. And we talked about the experience afterwards.
The sound massage consist of sounds but also of a concrete physical element. One can both hear the vibrations and feel them through the vibrations from the singing bowls. The bowl / bowls are placed on the body and are tapped out, and the vibrations propagate, both as audible vibrations / tones in the room and vibrations in the body.
It is a different listening experience, and the body’s connection to the room comes into play, and is experienced in a new way.
To both hear and feel the vibration is something that is usually reserved for bass frequencies, and to hear and feel the vibration at the same time puts perceptual mechanisms in a new situation.

The largest religious experiences I have had, has been with radios.
Years ago, I spent a lot of time experimenting with old radios, mostly as a kind of musical instrument, but also with a sense of being a kind of Robert Walton (Frankenstein’s father). When radios were linked together, more of the time, they lived their own lives, rhythms occurred, they changed and interfered with each other without my influence.
What’s actually happening with the electromagnetic quirks I have not quite figured out, but sometimes it’s as the radios come alive, or something alive is created between them.